Conlon Nancarrow was a punk rocker. He left school in the 30s to fight in the Spanish Civil War, fighting (along with Hemingway, I suppose) the fascist threat about to precipitate WWII. When he came back home, government eyes noted his communist party membership. He had a terrible time finding a foothold for his music in Boston and later New York, so he and his wife left the US for Mexico, where he composed in isolation for decades before he was 'rediscovered' in the 1960s.

His methods were renegade as well. He composed exclusively for player piano, inventing tools to punch holes in paper rolls to his specification. This is mechanical composition, devised out of necessity far ahead of midi's introduction, but quite similar in concept. His work's chief complexity is in rhythm, where he plays with gradual shifts in tempo, rhythm and repetition to create something very rich, sometimes overwhelming, but still something that can be felt as music.

This last thought was a surprise to me. I thought I'd be cracking a book of analyses and intended to take ideas for notating my own pieces, but it's turned out to be sort of a listener's guide. The first third is biographical, and the remaining chapters take his work in groups, each focusing on a compositional theme or idea. I've created playlists on Spotify for each of these chapters:

I dug the biography and was really surprised by how individual his thinking was, balanced with a down-to-earth, not-uptight approach to life that is missing from most 'academic' composers, but then again, not missing from many American composers. I'll keep re-visiting the later chapters and listening to his pieces–it's great to have a well-written guide to works like Gann provides us here. 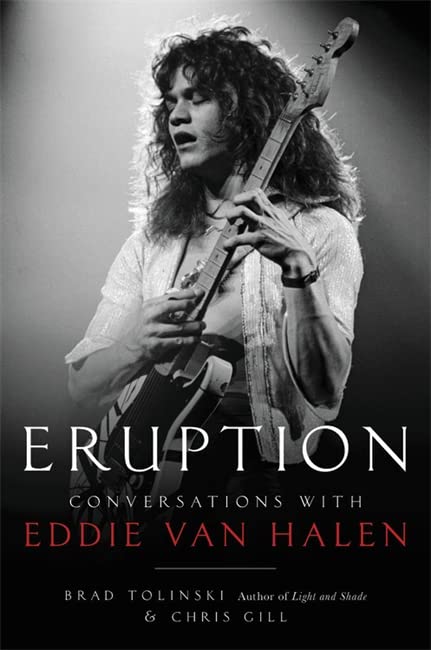 Ed is my hero and always will be. His energy, attitude and organic virtuosity on the first six Van Halen albums still kills me. I was 10 in 1982 and just starting to listen to rock radio religiously. I probably should've discovered him through Diver Down or Fair Warning (the two most recent releases at the time), but instead it was through an 8-track tape that came with my a giant console stereo my parents bought from a friend - a tape of their first album, Van Halen (1978).

I had no idea who they were and whether they were popular or what, but the drums and guitars on Eruption left an indentation on my creativity. After the fact I'd compare it to jazz, but hearing it for the first time I had no compass to guide me.

This book is the first where I feel like the subject is really given the respect he deserves. He was a well-rounded musician, comfortable on cello and piano, and his bandleader father must've advised them on the business side, since they were selling out self-produced (and self-promoted shows) to hundreds while still in high school.

He wasn't perfect and really struggled with substances, but strived for authenticity more than anything–these interviews keep it real throughout and made me feel like I got to know him better.

This book was a total surprise. I was trawling Abebooks during lockdown for a copy of Space Calculated in Seconds, the only coffee table art book I've seen on the Philips Pavilion from the 1958 Brussels Worlds Fair. Edgard Varèse, Iannis Xenakis, and Le Corbusier collaborated on one of the first immersive, site-specific multimedia works in the pavilion, the details of which are pretty hard to come by.

This book is smaller format, but full of images. Wever pulls together a bunch of testimonials by Philips staff and ephemera from the event to paint a picture of the work from a number of angles. He breaks down what it was like to operate the music and synchronized projectors, puts together project development timelines, and even unearths a bit of a controversy. Apparently, Le Corbusier, Xenakis and Varèse were not delivering on the aggressive schedule, so Philips commissioned a backup project, to be ready in case the primary one wasn't delivered.

Really interesting stuff on a super-obscure piece of art. The translation is a little clunky, but the many pictures and surprises about the work made it a quick fun read. And check it out: it's really cheap - $10 on Amazon at time of writing.

The Other Minds Archive at archive.org

This archive of recordings is mainly from San Francisco public radio station KPFA. I especially dug this piece on composer Richard Maxfield and this interview (and overview) with Conlon Nancarrow.

These are really original synth designs

Bob Gilmore's amazing series of audio documentaries, each focused on a relatively unexplored composer or area of music.

Pat’s Keynote Speech at the Society For Neuroscience Conference: "Dialogues Between Neuroscience and Society: Music and the Brain"

I appreciate Pat but do not love the silky smooth arrangements and production on the records so many love. Nevertheless, like so many artists (David Lynch, David Foster Wallace, Kurt Vonnegut), I appreciate hearing them speak about art sometimes moreso than I do experiencing their art. This lecture is thought-provoking and gracefully delivered.

I revisit this speech often since I rediscovered it during lockdown. Choosing how to think is an important skill–refusing to follow the story your brain creates as you make assumptions about your surroundings.

I'd seen a print of hers at MOMA in 2019, but I truly discovered Hilma over lockdown (actually, while I was recovering from my own Delta case) and was instantly enamored. This documentary tells the entire story of the earliest abstract expressionist - a woman marginalized by her methods (lots of turn-of-the-century theosophy) as well as her gender. Art History needs to be rewritten. If you don't want to sign up for Criterion, consider watching the excellent walkthrough of her retrospective at the Guggenheim by James Kalm, whose YouTube channel rules.