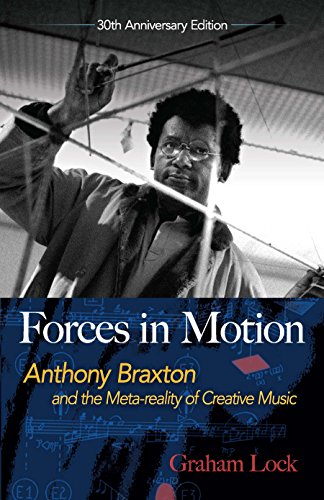 I'm reading Forces In Motion, an in-depth look at Anthony Braxton's musical perspective. It's incredibly eye-opening. Here are some quotes I marked to keep in mind. I've found this book to be incredibly enriching.

"Imagination can teach you the true meaning of pleasure. Listening can be one of the greatest of pleasures. You must learn to listen, because by listening you will learn to see with your mind's eye. You see, music paints pictureS that only the mind's eye can see. Open your ears so that you can see with the eye of the mind."

p15, Sun Ra, from the liner notes to Sun Song

"It's like in America, when we get through playin', the white people'd be asking me, 'Why aren't you more known in America?' I say, it's because your people are backing something that's commercial rather than something that's creative. It's because you people don't have a culture (chuckles). They never heard talk like that before, but it's true. See, my music's not American, I'd say my music belongs to the world."

p19 'BEAUTY IS NECESSARY FOR SURVIVAL'

"But he wasn't a good enough pianist and so he developed instead a language for alto saxophone. His interest in structure dated from the first solo concert he gave, in 1967. This was supposed to be an improvised concert: 'I imagined I was just going to get up there and play for one hour from pure invention, but after ten minutes I'd run through all my ideas and started to repeat myself. I felt like, "Oh my God, and there's still fifty minutes to go!" I thought, hmm, I better make sure this doesn't happen again. So the question became, How to proceed?'

The first answer was 'to section off various components, formings', and use these as the basis for new vocabularies which could then be fed into 'a modular system'. 'Now I was interested in improvisation only for its ability to generate structural dynamics and vibrational dynamics.' Generating this material became 'the science' of his music."

"B: I think I became aware of it somewhere around four or five.

L: (laughs) You were crazy at four?

B: (shrugs) It didn't seem crazy to me, I was just involved in the things I was interested in. By the time I was twelve, thirteen, fourteen, it was pretty clear that everyone in the family thought I was different. But I can say this about my family - at no point did they ever tell me that I could not achieve what I wanted to achieve. When I began to take music lessons, about eleven I think, my family never told me that I could not succeed in music; and later, as it became apparent that my music was moving in areas that they were not too excited about (to put it mildly), they never tried to discourage me or make me feel that what I was doing was not of value, just that they could not relate to it. And I thank them for that."

Note from Ben: Incidentally and fortunately for me, I feel the same way about my parents and and my upbringing.

"All of my recordings show the influence of Paul Desmond. But remember I never wanted to imitate anybody because that would insult the masters. What I liked about them was that they found their own way. You have to do that; and the only way you can do that is, you have to know yourself. You have to know what do believe in and you have to set out on a path and develop it. lt's the only way. You can't theorize it, even. You can theorize some of it but you've got to live it, and experience it, and you have to be tested to make sure that you believe what you say you believe.

Desmond understood that he couldn't deal with Charlie Parker's dynamic, electric brilliance - he knew he couldn't out-Charlie Parker Charlie Parker - but he also knew he could create the same aura by playing slower. So you go to the opposites. You've heard the old saying, listen to everybody so you know what not to play. As soon as I hear the pentatonic scale or the Parker licks or the Coltrane licks, I say, OK - bang! - next! It's the ones who've put together their own language, their own syntax, their own way of being- those are the ones I'm interested in. That's why I love Paul. Plus, he understood how not to let even ruffles and flourishes get in the way of singing from the heart."

''...'jazz' is the word that's used to delineate the parameters that African-Americans are allowed to function in, a 'sanctioned' zone. That's what 'jazz' is. 'Jazz' is the name of the political system that controls and dictates African-American information dynamics (and also the European or trans-European information dynamics that come in that particular zone). For instance - how can I say this? - the European and Euro-American definers have defined the music to the point where it is now so-called 'understood'. And when this happens, invariably African-Americans will vacate the form. How many African-Americans do you see playing Dixieland today? You don't see many African- Americans at bebop concerts, for that matter."

p92, The little box of Jazz

"L: Why separate from the musicians?

B: Because the social reality that surrounds the scene is not healthy. Not only that, I wanted to do my work, and you can't hang out on the corner and talk talk talk and be composing music at the same time. There's too much nonsense out there. Keep away from the musicians! That's one of the primary axioms - and keep away from the political scenes that surround the music. It's so ridiculous . . ."

p141, Keep away from the musicians

"...think in terms of a practice room, like going into a music college and walking through all the practice rooms; everybody's playing something different in each room. That's what I wanted the group to think of while we were playing the music: you play what you want and I'll play what I want, you leave me alone and I'll leave you alone. Collage improvisation was simply . . . I just wanted the musicians to think in terms of independence. Roscoe Mitchell has often talked of how important it is to . . . like, he would say, if the music's gonna fall, let it fall - don't be frightened for nothing to happen, just stay with what you're doing. "

B: I'm saying that whatever you think can be manifested. And whatever that is can be regenerated. I imagine. Or I don't imagine. Whatever that is. I'm only dealing with, as a human being, what you can think about on this planet."

"I've always respected the science in the music, though I haven't repected some of the related value systems: for instance, the concept of notation–I don't think notation is the problem, it's the concepts that surround notation. Bach, Beethoven, Mozart, all of the master Europeans who solidified Western art music were instrumentalists and improvisers as well as composers. Notation wasn't used then as a choking device to stop the blood, the dynamic, of the culture; it was later, when the technocrats made the process more important than the results, that we got the so-called crisis of Western art music, which is still with us. In fact, we can see the same mindset entering the bebop continuum: now they're making bebop so 'correct', it will be bopbe or something–it won't be the same music that Charlie Parker and John Coltrane player."

"It's like, everybody wanted to use freedom as a context to freak out, and that was not what I was talking about. One of the problems with collective improvisation, as far as I'm concerned, is that people who use anarchy or collective improvisation will interpret that to mean 'Now I can kill you'; and I'm saying, wait a minute! OK, it's true that in a free-thought zone, you can think of anything you want to think, but that was not the optimum state of what I had in mind when I said, let's have freedom. I thought any transformational understanding of so-called freedom would imply that you would be free to find those disciplines that suited you, free to understand your own value systems; but not that you would just freak out because 'the teacher's not there'. The teacher is still there!

It's one thing to talk about the post-Ayler cycle with respect to the events which took place in the first year, the second year . . . but if you look back at the last twenty years, what has freedom meant? For a great many people, so-called freedom music is more limiting than bebop, because in bebop you can play a ballad or change the tempo or the key. So-called freedom has not helped us as a family, as a collective, to understand responsibility better. Only the master musicians, the ones who really understood what they were doing and who did their homework, have been able to generate forward motion. So the notion of freedom that was being perpetrated in the sixties might not have been the healthiest notion. I say 'healthiest notion' because I'm not opposed to the state of freedom; I believe that with correct information and an understanding of respect for humanity, human beings can rise to their potential. But fixed and open variables, with the fixed variables functioning from fundamental value systems–that's what freedom means to me."

[Stockhausen's comments on a free jazz concert he attended in 1971: 'Everyone played as loud and as fast as possible, and everyone at once...But that's what always happens when people say "Let's be free": it produces chaos and destruction, because they have never learnt to use freedom as a means of restricting oneself, so that others can also be free.']